DAVE BARRY WILL TAKE A TIMEOUT

The world is about to get a lot less funny, beginning in January.

Dave Barry, The Herald's humor columnist for the past 20 years, said Tuesday that he will take an indefinite leave of absence from the newspaper. He may return in a year.

Herald editors wish Barry were making it up.

"Since Dave's columns began appearing every Sunday in The Herald, an entire generation has been born, raised and reached adulthood, " said Tom Fiedler, The Herald's executive editor. "Yet his unique sense of humor never grew up and never got old. Learning that Dave wants a breather is like hearing that Peter Pan joined AARP."

Barry, 57, said he wants to spend more time with his family after a hectic summer trotting from the Democratic and Republican national conventions to the Olympics in Greece and around the country on a book promotion tour.

Barry intends to stay in South Florida with his wife, Herald sports writer Michelle Kauffman, and their 4-year-old daughter, Sophie, and will continue to write humor and children's books. He also plans to finish filming on the screen adaptation of his book, Dave Barry's Complete Guide to Guys, which stars John Cleese as a British expert on 'guydom' and Barry as himself.

He also may chime in occasionally in The Herald, if events merit, but Barry said he has not decided whether he will return to writing his weekly column in 2006.

"Part of the reason for taking a year off is to find out if I just can't stand not being able to write, " he said.

Barry's column is carried by about 500 newspapers across the country and his absence will leave a void in Sunday features sections.

In 1988, Barry won the Pulitzer Prize for commentary, the only humor writer to have won journalism's top award, a feat that proves all other newspaper humor writers toil in Barry's formidable shadow, said Washington Post humor columnist Gene Weingarten, Barry's first editor at The Herald.

"This is the funniest person who has ever written for a newspaper, " said Weingarten, who edited The Herald's now-defunct Sunday magazine, Tropic, from 1981 to 1990. "And this is sort of a wretched admission from somebody who writes humor for a newspaper."

Barry, a native of Armonk, N.Y., was working for a small community newspaper in suburban Philadelphia when his writing caught the eye of Tropic editors in 1982. After a year of writing freelance columns for Tropic, Barry joined The Herald full-time in 1983.

Almost immediately, Barry made his name with wickedly funny and insightful observations on life in general and Miami in particular. Barry's humor, said former Tropic editor Tom Shroder, helped define Miami's image as a peninsular paragon of the peculiar.

From his weekly column to his annual projects — including the holiday gift guide, the Year In Review, and the Herald Hunt — Barry always found a way to connect with readers as though they were in on a private joke, Shroder said.

Readers who turned to Barry's Sunday columns to help them make sense of life's absurdities may feel as though they're losing a friend. But Barry, who also has written 25 books, insists it's not that bleak.

"And they can actually read the news, which is hilarious. That's all I read. I just read the papers and go, 'Well, that's stupid'. And I write 800 words and when it boils down to it, it's 'Well, that was stupid.'

"They can do that without me." 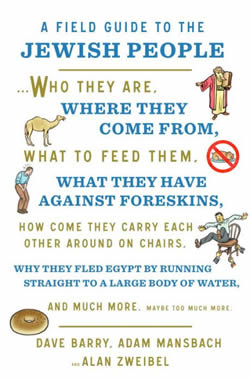